My Experience of Banking Around the World

Banks are like big giant corporations that exist virtually everywhere today. They are something most of us get so used to and are slowly being controlled by.

But the good news is that we have other options now.

I collected dozens of bank accounts in different countries between 2017– 2020. It was mostly due to the need to use my own money freely.

A little background here for anyone unfamiliar with how things work in China: for an average Chinese person, the annual foreign exchange quota is $50,000 or the equivalent amount in foreign currency. WeChat, Alipay, and UnionPay are other great firewall that keeps the payment system separate from the rest of the world. Purchasing or investing abroad is a pain in the ass. Fast forward to 2022. Bank accounts with suspicious transactions might be frozen, and people need to submit proof of reasons for overseas use. And with the increasing use of digital yuan, I keep thinking: what is the point of having all this money if you can not use it freely?

However, during my travels, I discovered that other countries also have their restrictions at different levels. So what is the solution for people who want to be more sovereign with their money?

One thing to remember is that bank accounts are mainly a tool to store savings, spend money, and invest. I am surprised to see how many internet gurus make offshore banking look so complicated. It’s actually the easiest step when it comes to planting flags.

I opened my first bank account in Hong Kong in 2016 and finally got to invest and use my money freely. Problems solved. But I was also curious to see how the banking system works in other parts of the world. Here are my findings—hopefully, they can help you to decide which country to bank in.

Timing matters. It was easy to open a bank account in Hong Kong before 2020. Simply an appointment in advance would do, and it did not require a deposit. I helped some people open HK bank accounts before 2020. Then Covid happened, and the border control situation made it almost impossible for people to go there in person.

What do I think of banking in Hong Kong?

Truth to be told, the system is quite outdated there. One of my cards got locked after I input the wrong password three times. I was told that the only way to unlock the card was at the branch… while I was all the way on the other side of the world.

And with the National Security Law enacted in 2020, allowing extradition from Hong Kong to mainland China, many people started worrying that this law might threaten civil rights. In fact, lots of Hongkongers either left or are planning to leave. I think putting your money in Hong Kong is no longer a smart move.

Singapore banks are decent. Due to many regulations, parking money there is safe. But they require a large deposit to open an account—typically $200,000 Singapore dollars if you are not a resident there.

What do I think of banking in Singapore?

Singapore is one of the best banking options, especially because accounts there can be opened remotely. The bankers there speak fluent English and Chinese, too; Another bonus is that you can freely deal with crypto transactions with banks in Singapore.

I opened accounts with two banks in Vietnam in 2018. Of those two, I preferred the digital one called Timo. It was quite cool. Their branch was like a cafe, quite a pleasant and refreshing experience. However, they don't allow tourists to open accounts with them anymore since 2020.

What do I think of banking in Vietnam?

I don't recommend opening any bank accounts there if you are not living or investing in Vietnam. It is always smart staying away from countries that have capital controls. Many of these countries are making the capital inflow or outflow a pain in the ass. All these unnecessary restrictions are the last thing we want to deal with.

I was exploring Myanmar in 2019. I remember the bankers were quite surprised that I wanted to open a bank account there. The interest rate was quite high. As well, Myanmar went into civil war in 2020, making it an unattractive option for storing your wealth.

What do I think of banking in Myanmar?

Clearly, it is not a good option for banking anymore.

It was pretty easy to open a bank account in Georgia back in 2019. It was one of the countries that was not in the CRS back then ( CRS as Common Reporting Standard ). It was as simple as walking in and opening an account. The banker did not ask for many things, just a passport and basic personal information. That's it. I got the card the next day.

But Georgia commits to implementing CRS by 2023, which may make it a less desirable place to bank.

What do I think of banking in Georgia?

Georgia has its benefits. You can even apply for credit cards there. They have a high-interest rate for depositing US dollars. However, as a crypto native, I do not see the tiny interest rate on fiat as attractive, so I do not use the account that much.

It was pretty easy to open a bank account in Armenia in 2019, but the banker asked lots of KYC ( KYC as know your customer ) questions. Be prepared.

What do I think of banking in Armenia?

You can open a premium account in Armenia with only a $5,000 deposit. And Armenia is still one of the countries that is not part of CRS. These were the two main benefits for me.

The banking system in Turkey is quite interesting, and it has lots of good options.

However, I have found that there are so many extra fees if you need to use it for anything other than spending money. Also, the exchange rate is really bad. Furthermore, for some banks, you need to use a VPN to log into Turkish banking apps while you are abroad. Luckily, lots of smart young Turks are trying to improve the situation with different digital banks.

What do I think of banking in Turkey?

As Turkey is one of the most underappreciated playgrounds for nomads, collecting Turkish bank cards is fun if you want to make the most of ​​geoarbitrage.

What do I think of banking in Portugal？

Do not even bother, especially if you are not planning to live in Portugal.

Banking in America is one of the best options for non-American citizens and residents.

I don't have any negative experiences with it so far; I even got a card that can withdraw money from an ATM for free. Some nomad friends of mine go even further by applying for credit cards there. Yes, it is doable, and the world has many hidden secrets. You need to know where to find them.

What do I think of banking in the United States?

Go for it if you are not an American citizen or resident.

I liked using Wise and Curve, but I’ve stopped using them now. At the end of the day, you get what you pay for.

If you are still using NEO bank, the smart thing to keep in mind is to NEVER put too much money in any digital bank. I was surprised to see some people putting their life savings there. Oh well, if anything happens, these companies' customer service is probably only slightly better than Google’s.

I built a product to help other Chinese solve their banking problems. But this led me to realize that banks are also part of the system—it is not solving the real problem because people are still using fiat money at the end of the day.

With that said, I still believe that most people will be in a much better position by using 1-2 offshore banks with fintech banks than those who only use banks in their own country.

A Second and Better Option: Bitcoin

These are my main concern for all banks, including traditional and fintech ones:

Seeing the problem is the first step to solving it, but considering that we are still early in the crypto era, I have implemented two simple rules for myself and am happy to share them with you:

For example, I happily use my Turkish credit card to spend fiat money while living in Istanbul and earn miles at the same time. I use my other cards for saving and investing. The art is not putting money where you are originally from and definitely not where you physically live. I will explain tax residency better in the future.

I am also using non-KYC crypto cards or cash for all my other sensitive spending. Getting coins the non-KYC way is really important, too. If you are a privacy geek like me, I believe banks will be obsolete for people like us in the future.

No more big data watching over you. Chill out and keep stacking—no one can easily control you now, but it would be wise for you to remain quiet and enjoy life. The other day, I was having a fun conversation with a Romanian friend, and I said:

“The world is like a playground for a few people and a prison for the majority. But the good news is you are only being imprisoned by your mind.”

I hope you will join us. 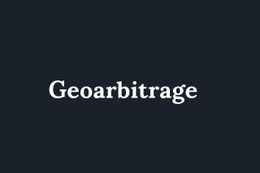